Campaign update in one word?  Wow.

Sure, I know what you’re thinking.  “Wow, she never just says ONE WORD about anything.”  And you would be correct.  But in my defense, this is an important subject matter and I don’t think any of us should ever stop talking about it until cancer is no more.  Eradicated.  Obliterated.  Kiboshed.  Kaput, 86’d, ixnayed…oh, right.  Less words. Got it.

So here’s the deal.  People have been working non-stop.  Events are in full swing (thank you, James Ball and Peter Franklin Jewelers for last week), the asks continue every day, and there’s no sleep till May 31st, or, Brooklyn for all you fans.

Over the course of the last two weeks, I have been continually reminded what a difference their collective effort is making.  Olivia and I attended the Boy and Girl Brunch at SweetCars Saturday morning.  While there were scores of people and really cool cars (think Cobra II driven by Jill Munroe, my least favorite Angel of Charlie’s), something was noticeably absent:  The Boy and Girl of the Year.

Caleb is sick.  It’s not uncommon to go through peaks and valleys during the course of treatment.  But when that happens, you are instantly put on high alert.  Fighting infections becomes exponentially more difficult.  Your body is busy trying to fight the cancer and has zero time or ability to fight things like a cold.  And as we all know, we can literally only take so much at once.

That’s when it’s time to send in the cavalry.

Gianna’s cavalry arrived at Bishop Dwenger High School on Saturday afternoon.  Cancer invades not just the body.  It simultaneously invades, and pervades, every aspect of people’s lives in one fell swoop.  It does not ask for permission; it does not ask for forgiveness.  It just shows up, unannounced and unwanted. And it is our job and duty as members of one big, crazy, intertwined family, to help.

Friends, family, neighbors, and strangers attended Gianna’s benefit to supplement the mounting costs of her treatment, much like the overall mission of LLS.  Every effort matters.  I think sometimes people make the mistake of saying, “I can’t do very much so what’s the point?”  The point is this:  it’s cumulative.  It adds up.  Doing something is always better than doing nothing.

Just ask Erin.  I was scrolling through Facebook before I logged on to write this and there she was!: 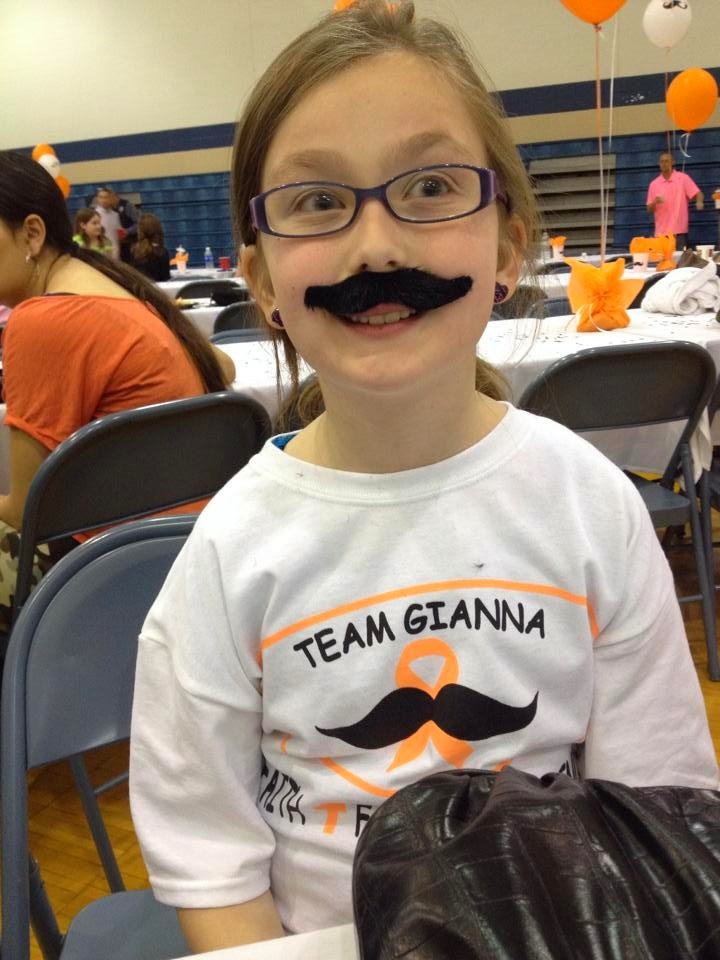 Erin is the daughter of great friends of mine, and a classmate of Gianna’s.  To see this 9-year old sitting there in support of her same-aged friend who is in the middle of a fierce battle, reminds me just how short and sweet this life is.  Quotes about friendship immediately flooded my brain…a good friend will bail you out but a true friend will be right there, sitting next to you…

Chances are afforded to us every so often in this lifetime.  A chance to forgive, to forget, to move on.  A chance to apologize, right a wrong, and become a better version of you in spite of yourself.  A chance to ignore fear and surpass last time performances solely on the basis of you know you can; like taking that shot at the buzzer, throwing that Hail Mary, or nailing that first kiss.  Fearless do-overs are a beautiful thing.

I want these kids to have their own firsts.  I want them to have their own learning experiences and their own do-overs because that’s what life is all about.  We course correct along the way.  And it’s high time cancer is off the course and out of the way.

So while the effort of one five or ten dollar donation might not seem like much, what if EVERYONE YOU KNOW AND I KNOW AND WE ALL KNOW did that?  I may have pretended to hate math in high school, but it’s that whole power of numbers thing.  Addition, I believe it’s called… Speaking of numbers, if there is only six degrees of separation between any of us and Kevin Bacon, I think that dude should donate.  Who’s on it?

Nothing happens if we don’t try.