As this weekend winds down, I find myself loving every minute of its reflection.

First, let me just say I love, love, love thoughtful people.  Caveat:  not the sickening over the top I expect something in return for disingenuously kissing your ass and feeding your already overinflated ego type “thoughtful” people.  I abhor those buttmunchers. 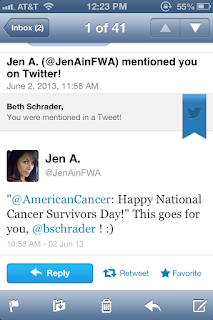 Classy, direct lady.  Stands up for what she believes in, and calls out anyone with an obvious agenda.  Thanks, sister.  You dissipate my Catholic-girl guilt just by being you.

In typical dichotomous fashion, I’m pretty sure I not only constructed a brick wall on the fly this weekend, but tore one down as well.  I wish anyone the best of luck getting through what I throw up when it has anything to do with Liv.  I move mountains that make brick walls look like child’s play for that girl – 16-year old pain in the arse that she is.  And never will that change.

Shockingly, slowly, maybe the carefully constructed wall which I erected two and a half years ago (ok, fine, in 1973) has come down.  Maybe…I think.  I’m somewhere between left and right, gliding back and forth like Oksana Baiul trying to greet that godforsaken little ball before it lands and I lose my turn.

As if that doesn’t require enough Olympian-like maneuvering, apparently I am also supposed to give it a whirl without ever remembering how much Pong kicked my ass, or how big of a letdown Super Breakout turned out to be.  I suppose if I am going to continue to be defiant and “think,” then the least I could do is remember that you had three turns to clear two screens of bricks before it was a total GAME OVER.

Speaking of games, last night’s was certainly another love of my weekend.  D-Wade “ain’t got nothin’ more to say about his bum knee ‘cuz that’s all we been talkin’ about for 2 months,” and Fredo is sick of carrying that gimp and the pterodactyl who can’t get anything done in the paint when he runs into a 7’2″ brick wall.  Hey, Bosh…I know a girl who can help break you out of your slump.  See above when you’re done hanging your head in voodoo hex formation.

Lastly, my day with Liv has been pretty great.  I took a break from writing a book proposal (fingers and eyes crossed) to make her breakfast when she awoke at lunch.  We talked about meaningful things, why people do what they do, who we allow to infiltrate our lives and those who, without question, don’t deserve an ounce of our energy.

As I type this, Liv is sitting right beside me, typing paragraphs four and five of her English paper – due tomorrow, duh – while critiquing the first three I wrote.  The three, mind you, I put together in an hour after never having read either book we are “linking the greater idea between.”  She’s staring at me now, after resolutely announcing “I’m done.”  The shot clock takes longer to expire than that effort, but what the hell do I know?