For the third time in my life, I graduated on Sunday.  It is my first Master’s Degree, although I wore a black gown complete with a non-Aeropostle hoodie signifying the College of Theology instead of a green jacket. 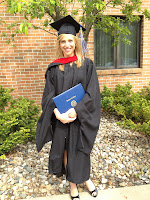 I  used to loathe people who were “professional students.”  You know, the kind that have 27 initials and dots after their name and are forever writing “dissertations.”  But now – now I sort of want to become one of those people, if I’m not unawarely doing it already.

At least that much I know with certainty.  I can neither imagine the cessation of learning nor the idea of staying quiet about what we’ve learned.  Whether it’s from textbooks or real life experiences, sharing knowledge with others is paramount.

How remiss are we if we don’t look out for one another?  We’re all in this great big thing together, and we have been placed exactly where and when we are for a specific purpose.

People who walk around this world aimlessly amaze me.  While I am certainly not exempt at times, I am fully aware that there’s some calling I’ve yet to answer.  As we marched triumphantly (obeying our Master of Ceremonies in Biblical reenactment) across campus to the gymnasium for commencement, I was overcome with joy.  As tired as I was, as lost as I sometimes feel, as difficult as some of that coursework was…it was a serenely peaceful walk.

Church bells were producing a beautiful rendition of Amazing Grace (my favorite), which of course caused me to tear up for the first of about six times that afternoon.  Liv thinks it’s funny; she purposely makes it her teenage mission in life to purchase the most gut wrenching sappy-sap cards she can find, as I’m relatively certain she’s become a bookie on the side and has an over/under going on somewhere.  I bet she cries harder than the time she did at church on Mother’s Day when they flashed pictures up on the screen…and it wasn’t even me…

We were met in the auxiliary gym by an applauding choir, lined up on both sides.  Teary eyes number two.  I still can’t quite gauge with accuracy if it was due to the impending graduation or a trip down basketball memory lane.  Either way.  Less mascara.  Walking into the filled-to-capacity gymnasium, I made the trek down the middle aisle to the third row.  My parents and Liv were seated exactly where they knew to be (following in Dad’s Master’s footsteps; he has a hoodie, too).  I waved, smiled, and was thankful for my Catholic roots which taught me how to sit and stand on queue like a champ. 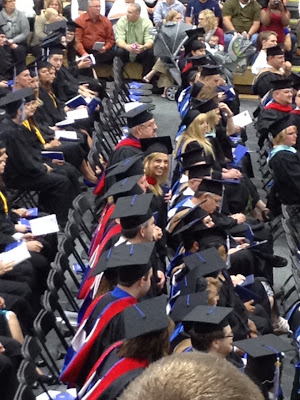 Dr. Sarah M. Kilemi was the brilliant guest speaker from Kenya.  She, along with her loving and supporting family, traveled 24 hours across the oceans to receive an Honorary Doctorate Degree and deliver a speech that moved me to tears (three through six).  At a very basic level, she discussed the need to help people.  To give more than we receive, to love more than we need to be loved, to be humble, and to serve.

I don’t know if a Master’s Degree will help me to be more of a doer than I already am or not.  I don’t know the answer to “What are you going to do now?” when I’m asked.  And I don’t know exactly what road I am supposed to be on…just yet.

But thankfully, I do know how to spot roadblocks from a much greater distance than when I was younger.  You won’t hear me argue about whether it’s from the degree or the (seriously?) experiences, just as long as they get out of my way.  There’s lots to do.