Yesterday was a day filled with a myriad of conflicting emotions.   A totally productive day, we arrived at the site and the team was instantly silenced.  Smiles erupted when we realized that the holes we had dug the day before were easily 3 feet deeper than when we left.  That’s the whole point.  We are not here to do all the work for the people who live here, but rather, begin the work and have them come alongside us and complete the project after we are gone.  The entire water filtration system is a pilot initiative; if it works, it will be replicated at other community sites and eventually, at homes within the communities.
To say that clean water is a problem here is almost as gross an understatement as saying I miss cheese right now.  Although as an aside, I’m off the cheese when I get home.  An entire revamp is happening.
No running water can be found within the homes of those who live in Terrencio, Amaya, or El Porvenir. There is one central community site in El Porvenir which has a well whereby 120 or so residents travel by foot to wash their hands, their bodies and the few clothes they own.  And thatwater?  Not clean at all, but it is literally all they have.

So in conjunction with Food for the Hungry, we dug a 5 ft. trench flanked on either side by two 4 ft. holes.  When Alfredo, the head FH engineer, and his tape measure were unavailable, the team used yours truly to determine if we’d hit the 5 ft. mark. (Oddly, 4.75 inches is still 4.75 inches out of the country).  The idea is for water to run through pipes we placed inside the trench, directing it down the main hole lined with rocks anxiously waiting to filter out most of the crud that shouldn’t be in the water in the first place.

We worked and worked and worked and dug and dug and dug.  If Monday was off to a rocky start, Tuesday rocked altogether.  An assembly line was formed, shifts were taken, and blisters appeared as if they were meeting invites on our iPhones.  One person would work the pick ax until the sweat prevented their hands from holding it any longer, and another would immediately step in – or, down, as it were – and shovel the dirt out and up.
My job in all of this, after pick axing wrecked my hands, was to level that excavated dirt with a genius Casey invention (coined “Kung-Pao shovel” by the ever politically correct, Lauren Clounie).  Not only did I happily level that dirt over and over again, according to Erik I did it, “Like a BOSS!”  Yeah, these kids have definitely gotten to know me inside of 4 days alright…
When Alicia announced that lunch had arrived, we piled into the vans and headed to Amaya for more VBS.  I love turning into the church and watching oodles of kids run towards us, waiving and shouting like they hadn’t in fact just seen us 24 hours earlier.  It’s a good, reciprocated feeling.
I was only in craft mode for about 20 minutes when Liv came into the classroom and asked if I was ready for our sponsor child visit.  Ready, anxious, prayerful, and a slew of other adjectives, was I.  After last year’s trip, we began to sponsor a then 4-year-old little girl from El Porvenir named Leoncia.  I knew nothing about her other than if she was from that particular village, it might be tougher than normal physical circumstances under which she and her family would be living.
Last year, we learned while traveling the main road in El Porvenir that a dump was located in the middle of the village.  Our facilitator warned us that one side was infinitely “better” than the other – meaning you were only slightly in tears on your way there; and then you were reduced to full-fledged emotional toll as you encroached.  I clearly remember smelling that emotional toll last year before actually seeing it.  Realizing the children were dodging flames in an effort to grab whatever usable items and food they could, I gasped in the burning air and wished my brain wasn’t processing the same scene as my eyes.
So, I stopped.  I stopped right in front of the last house on the right…the one closest to the dump and took it ALL in – the overcrowded, dirty home with undernourished animals, kids, parents, and grandparents.  I looked in their eyes, said hello, and held onto that feeling for an entire year.
Until I saw them again yesterday.  When the FH van stopped out front of the exact same house and said, “We’re here.” 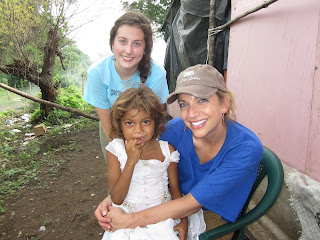