Is it Monday Thursday or…? 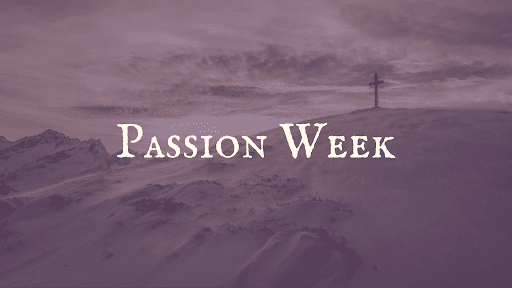 Until you realize the word Maundy originates from the Latin, mandatum – which means, a command, or order. What happened on Maundy Thursday? The last supper – when Jesus gathered with his floundering friends for a meal that tasted of freedom. He got up from the table, tied a towel around his waist and began to wash the feet of his disciples…and with that selfless, lowering of himself act, gave us a new mandatum – a new commandment, to love as he has loved. This is Christ’s command, that we love one another.

If someone would have led with that in my formative years, religion and God would have been much less confusing to me.

Just so none of us are confused as you read on, let the record state that what I’m about to tell you is NOT the Maundy-Monday Thursday/Good Friday/Easter messaging. Rather, I want to Delorean back to this past Sunday which began Holy Week and talk about Palm Sunday. Let’s toe the line there, shall we?

First please NOTE: this will be a 2 part post because my husband just read this and said, “I hope to be done reading this by the time I am 50.” Mmmmkay. 2 part blog comin’ up.

So do you know anyone who only goes to church at Christmas and Easter? My family used to affectionately call them “Creasters.” Why do you think it is, that people who only choose two times a year to worship Jesus pick those two celebratory days?

Well, other than guilt, I can tell you that on the first Sunday in Advent (the season leading up to Christmas) churches will typically read the same passage that is read on Palm Sunday from the Gospel of Matthew. Matt: 21:1-11 is a Palm Sunday reading. So if it’s a Palm Sunday passage, why do churches also read it in December at Christmas time?

Because the same thing is happening. People were awaiting their coming King.

So THIS was the exact day they had been waiting and hoping and praying for…THIS was the moment! They believed their King was coming to deliver them from the misery they had been living under at the hands of the Romans. Their lives were not free. And so their expectation was that someone – a King! – was someday going to save them from all of the oppression.

The Jewish people were both right and wrong with their expectations. You know how when you maybe talk to someone on the phone & you get a visual of them – some expectation of them and then you meet them and you’re like…wait. There’s no way that’s the same person. That’s not what I expected.

Or when a friend tells you about one of their friends and explains a bit about them, and then you meet them yourself and you’re like…What the heck were they talking about? That’s not what I expected them to be like.

Same thing with Jesus here coming into Jerusalem. Definitely not what the locals expected. The Jewish people were both right and wrong with their expectations of Jesus.

They were right, in that Jesus is indeed the great Messiah, the deliverer sent by God to save his people. But it will turn out to be a salvation and deliverance much bigger than they realize or thought. And it will come about in a much stranger way than they expected.

Their expectations would not equal the reality of what actually happened when Jesus rode into town.

Perspectives shape our expectations, don’t they? Perspective shapes our framework.

It was then, just like it is now, a celebratory week.

So we are talking about a celebration – a party going on. Hard to imagine amidst Covid-19, I know. But that’s what is happening onPalm Sunday. It’s why you often see a bunch of kids running around willy-nilly with palm branches swatting each other and carrying on. They are celebrating!

We also need to understand that the people in Jesus’s day who were celebrating Palm Sunday were not only looking back to their deliverance from the bondage that had been undergone by their forefathers in Egypt (kind of like they’re under Rome’s bondage now). They were also, at the same time, looking forward to a great and final liberation when the Messiah King would come and they would be restored to all that had been foretold to them.

Now I don’t want to go down the obvious road of politics or pandemics here, but suffice it to say – this is not unlike a time right now for those who are sickened by the state of our President, our own government and rulers and are hoping and waiting and praying with an expectation that a final liberation would happen, and our country would be restored to all that had been foretold to us by our founding fathers. And, before a novel virus came on the scene.

But as you know, not everyone in our country feels that way – some have a different perspective and are perhaps waiting for something else. That’s just like the people in Jerusalem.

Now I have no idea from what perspective you come from in terms of Palm Sunday – you may have one all your own and that’s fine. The point I’m trying to make here is this: we all come from different perspectives – but the ONE thing people back in this day as Jesus rode into Jerusalem were all wondering, is the same thing we have to ask ourselves and be certain of today:

WHO IS HE? WHO IS THIS KING? WHO IS JESUS? Why does any of this matter?

Tune in for the second half of this post. You know, before my husband reaches halfway to a hundred.