I Draw the Line at Granny Panties

“Mom, do we have any plans the weekend of March 9th?”  Olivia asked me this question roughly a month ago.  I vaguely recall responding in the negative.  But oh, how it’s all coming back to me now…

FOUL LANGUAGE, BAD PARENTING (x2) and a lot of UNCLASSY AHEAD.

This is the weekend Liv brought home her “daughter.”  A practice baby if you will, for her Child Development class.  The whole point of the assignment is to teach the students just  how hard it actually is to be a parent.  And thus – you guessed it, avoid becoming one.  Which means NO SEX before marriage.  Abstain you teenagers!  Abstain.

So I picked Liv up at 2:45 Friday afternoon.  Out she walked from the main entrance of Homestead with a raggedy car seat, the baby sort of propped up in it, and the diaper bag containing all the necessities right on top of its head.  “Do you get points taken off if you suffocate it?” I asked.  First eye roll. 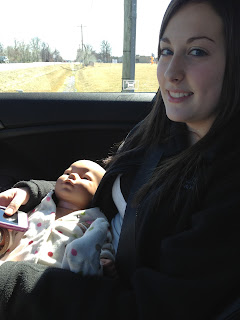 We live 1.2 miles from the High School.  The baby started crying (a/k/a devil-like shrieking) before the garage door went up.  My weekend suddenly looked very bleak.  There wasn’t much time until we had to leave to meet Sam and Alex (John’s girls, ages 23 and 18) at Glenbrook.  Jack, Sam’s precious 5-month old son, would join us.  Looking back, I wonder if he felt slighted a bit.

Liv and I waited and perused in Barnes and Noble for about 10 minutes before they arrived.  All was quiet on the baby front as it relaxed on the ground in its car seat while I read Runner’s World.  Immediately after Sam, Alex, and Jack walked in and pleasantries were exchanged, all hell broke loose.  “Come on!  Seriously?” quipped Liv, completely disgusted.  Alex gave me the look, we both kind of laughed under our breath, and into the mall corridor we went.

Part of the assignment was to notice and record how strangers in a public setting responded to a fifteen year old with a baby.  Liv expressed concern for other’s reactions, as she didn’t want to be thought of as “skanky.”  I enjoyed that comment almost as much as I enjoyed her complete oblivion to what that might make me…Super skanky?  Ho-ho-horrible?  Instead, we were all a little shocked when these total mall strangers expressed amusement and empathy, saying things like, “Oh, I remember when I had to do that.  It sucked.”  Or one guy, who had to be in his early twenties but masked it well with several piercings and ill-fitting to-the-ground-pants clamored, “Hey honey (to his wife(?) pushing their(?) child in a stroller) git a load a this!  That ain’t real, is it?  Nah…no way!  What is that thing, a doll?!  Well I guess that’ll teach ’em not to have sex in school, huh?!”  You tell me, sir.

That fun fest occurred in store number one.  I successfully purchased a floppy hat which I will soon prance around on the beach wearing, while Liv, looking completely frustrated, stood in a corner feeding her baby, still in its car seat but now on top of a clothing display.  I walked over to her and asked how I could help.  “You can’t.”  She may have had a point.  When those words spewed with wrath from her lips, I was immediately reminded of a little something I may or may not have done as a wet behind the ears mother.  We moved to Chesterton when Liv was 6 months old and she began pulling up – ready to explore every inch of our new house afoot – right around 9 months of age.  I, with one arm carrying my What to Expect After You’re Done Expecting book and the other hoisting Liv, moved the fake wooden memory trunk that doubled as a coffee table to the end of our bed so she would not scar her perfect face on one of its corners.  Go me.

Several days later, I was dressing her on the bedroom floor between my side of the bed and the armoire, which was maybe 4 feet away at best against the wall.  It was our little “play lane” and I tickled her, read to her, loved her there frequently.  Freshly changed, jumper buttoned from footsies to neckline, I raised her up over my tilted back head, locking eyes and smiles as only we knew how to do.  Ready to venture back out into the living room, Liv still high above my head, I walked around to the front of the bed ramming my shins right into that damn trunk as my real baby went soaring across the bedroom!  Time stood completely still as I watched, in slow motion, two huge blue eyes at ceiling level, widening with fright by the second.  She plunked down into the non-play lane (k/n/a the danger zone) as I leapt across the bed, ready to size up the damage.  I wondered what kind of Doctor one calls for a dane bramaged 9 month old and her mother, whose stomach was now located in her ankles.  I sped-dialed the pediatrician, was assurred that only her wind got knocked around, and was on the local Child Protective Services watch list until I moved to Fort Wayne.

So yeah…my unharmed fifteen year old may have had a point that I couldn’t help her in store number one, but I asked anyway.  We got out of there in a hurry and Liv and the girls strolled into store number two, Victoria’s Secret.  Well fed, the baby remained quiet long enough for Liv to acquire several unnecessary yoga pants and T-shirts to carry around until she was ready for a dressing room.  I walked around VS aimlessly, thinking of the real life oxymoron that was happening right before my eyes.  Several employees – way too young and out of shape to be dressed in all black (not helping) spandex and lycra, with tape measures draped around their necks as if I’d ever want their stained mitts sizing up my boobs – began commiserating with Liv about the situation.  “Yeah, dude, I was like, no way!  I locked mine in a closet all weekend and just took the F.”  Collective laughter.  I have no worries about the family unit or our future generation whatsoever.  Don’t be silly about that.

Devil shrieking, round 17, happened before we could even make it to the dressing room.  “I am going to punch you in the face!  You are a CRACK BABY!  Mom, shut this thing up…pleeeezzee!” Liv said through clenched teeth.  Now, while I would like to say she was purposely that dramatic, it simply wasn’t the case.  I could actually see and feel the frustration and stress ravaging through my poor child from head to toe.  And, I liked it. 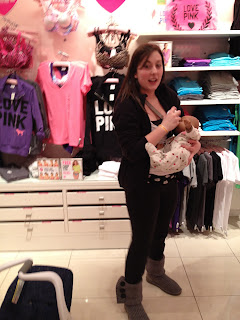 I liked it even more when she followed up her Jerry Springer-like comments with, “I AM NEVER HAVING SEX!  NEVER!”  Whew.  I almost believed her.